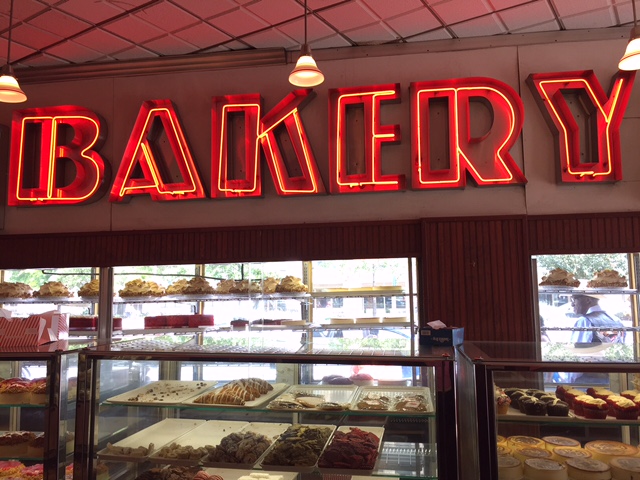 We just visited a fun place in New York- Junior’s Cheesecake, the original Brooklyn location….the picture is their counter and you can see the sky high lemon pies in the window…amazing and well worth a visit.

Andrew and I love the saying, “winners celebrate and losers read the rules”. It is a heartless yet truthful way of saying that people who come out on top do not usually say, well, shucks, this was because I had so many advantages…no way…we usually say that we had quite a bit to do with our success.

But when things aren’t going so well, it’s easy to look for someone or something to blame.

This summer’s sales were below plan for us. After we did our analysis, we realized it is almost entirely due to the sluggish sales at First Canadian Place – the other 2 stores beat their plans! So I was tempted to entirely blame the Pan Am Games during which many people chose to stay home rather than come downtown.

But with the brusque “losers read the rules” motto in mind, I asked Amy to brainstorm with me about ways in which we could better serve our busy FCP customers. She came up with the idea of offering to hold customers’ purchases so that they can just pick them up on their way home (many people do not trust their office fridges, it seems!).

We’ve avoided doing this in the past because our FCP store is the size of a closet and there’s very limited space. But Amy has made it work and customers appreciate the change. Whether this will actually make a difference to FCP sales in the long  run, I don’t yet know. But I think that when something is off-kilter, it’s a good habit to look for one’s own role in the problem, not just “read the rules” to find something “out there” to pin it on.

At PGB, we added a small amount of cream cheese to the plain vanilla icing. Some customers liked that, some didn’t. At Sticky, the vanilla icing is a little different – fluffier, all butter – most really like it but not everyone. Similarly, in the early months of Sticky, we had some feedback from customers about getting a bun that was soggy – maybe underbaked? – and then that same day, one of our...

Since opening Sticky this spring, we’ve considered two opportunities for additional space, one downtown and one near our store on St Clair. Andrew and I talked both opportunities through, and for a number of reasons, we didn’t move ahead with them. Although we are open to expanding our physical space in the future, for now we decided that the best approach is to increase revenue through marketing...

There’s a popular saying that Andrew likes: “throw stuff against the wall and see what sticks”.    I’ve thought of this a lot lately as we have been getting to know our customer base and what they want from Sticky. Some new items since we opened have been barn-burning successes: cakes; sticky buns without pecans; sticky buns with cream cheese icing; mini fudgies; cookies; and mini sticky buns...

Andrew and I were in New York on the weekend and as we always do, we stopped into Magnolia Bakery. This business first opened in the 1990s and is still going strong. I have such admiration for the owners’ business acumen over so many years. I also really like some of their products: their icebox pies and cheesecakes are very good, in my view, and those products I don’t like as much, well, so much...