On Tuesday morning at 630 AM, still sleepy from a relaxing long weekend, I received a panicked voice mail from PGB’s Head Baker, Andrea, to call her ASAP. Andrea never calls me at home before I go in to work so I knew something was up. Sure enough, someone had thrown a brick through our main store’s window and taken both of our iMac point of sale terminals and the Moneris terminals and, well, it could have been worse…but it could have been better. 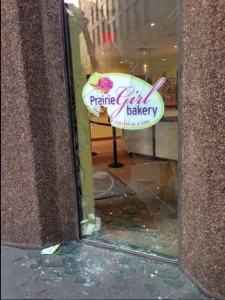 Add this on to some other questions and concerns going around in my head at the moment and all I can think of is Woody Allen’s quote, “80% of success is showing up”. A great sentiment that especially applies when things aren’t all easy-breezy. Someone asked me recently if I could recall a time when I wondered if I was on the right path and except that it would have been rude, I’d have laughed out loud. Show me a person who claims to never wonder about his or her path and I will show you someone who is either stretching the truth or deluded.

When I was practicing law, sometime between becoming an associate and joining the partnership, I remember calling the University of Calgary to see if they had a dentistry program. I also had times when working in a big company felt like the opposite of “me” and now that I am an entrepreneur there are times (like this week) when the security of a corporate job feels very appealing.

I guess what I have learned is that showing up, doing the next obvious constructive thing, and then the next… is the best approach. So far I haven’t made a big decision while in a low period and I hope I don’t. I am a big advocate of making changes and dong different things in one’s life, but the best changes aren’t made from a low point. Mostly I’ve found if I just keep going, I am able to gain perspective and find solutions or options which are, say, better than dentistry. No offence to you dentists out there.

The shorter days and colder weather are dragging me down – and winter hasn’t even started yet! When I feel this way, items can languish on my to-do list. With my handy-dandy Evernote app, I can move a task from Monday to Tuesday to Wednesday with a simple cut & paste. But everywhere I go, there it is! A hack that usually works to get me out of this push-forward rut is this: Aim for...

Steve Gregory is a gifted teacher about sales management. Steve consulted to the bank,  and Andrew and I heard his talks many times. He is the kind of speaker who paints pictures through his stories  to make memorable  points. One Steve story I have never forgotten is about interviewing people. Sometimes a person shows up for an interview and you know within the first few minutes that they are...

I’ve learned that flexible thinking is a great thing. For example, a few years ago, I would not have agreed to a tipping option in a bakery – and now I have one. In setting up Sticky, we realized the landscape had changed and that some coffee/bakery places include a tipping option in the cashing out process. We decided that a tip option gives customers the ability to give the team something extra...

It’s been a minute since my last post on May 17th! As I write this on July 9th, it is hard to even remember the gjillion things about the opening of Sticky on May 27th – and the weeks since then. And even if I could remember all the details, that would be a boring litany anyway. Suffice to say that the HVAC broke and then was fixed, that many deliveries were late and then replaced, that...