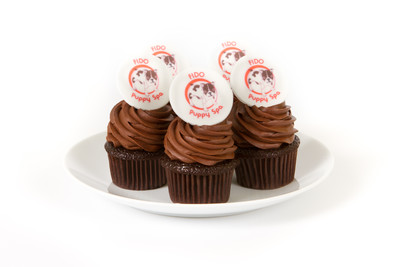 As it turns out, we had done cupcakes for this person’s child’s birthday, with cute little fondant toppers in her favourite cartoon character – not the toppers shown to the left with a fictitious company that I made up for the photo shoot. (After months of guiltily using the blue bank’s logo on toppers featured on our website, I figured it was time to start making corporate logos up). Anyway, the point of my story is to mention that we are seeing an amazing take-up by customers of our toppers and custom cakes. Here’s 3 things I have found interesting in our foray into edible ink:

1. The greater the specificity, the better. The above mentioned celebrity doubled his order once we showed him that we could put the exact cartoon character onto the cupcakes, not just a random, say, frog.

2. The point of the toppers and images on cakes isn’t always about aesthetics – some images are in weird colours and the messages obscure:  “Way to go, TK7, on instal 1!”. Huh?! Obviously, it means a lot to someone.

3. Online customers are savvy and can figure things out. Ailish thought it would take time and patience to have people actually use the option to download a JPG right into their shopping cart when buying toppers. But no, this week we received a large online order with a major company’s logo just popped right in – no fuss, no muss, let’s just get it done.

I know I have mentioned this before but, really, trying new ideas in a business is a constant source of surprises: you win some, you lose some!

At PGB, we added a small amount of cream cheese to the plain vanilla icing. Some customers liked that, some didn’t. At Sticky, the vanilla icing is a little different – fluffier, all butter – most really like it but not everyone. Similarly, in the early months of Sticky, we had some feedback from customers about getting a bun that was soggy – maybe underbaked? – and then that same day, one of our...

Since opening Sticky this spring, we’ve considered two opportunities for additional space, one downtown and one near our store on St Clair. Andrew and I talked both opportunities through, and for a number of reasons, we didn’t move ahead with them. Although we are open to expanding our physical space in the future, for now we decided that the best approach is to increase revenue through marketing...

I have been eating a lot of baked goods lately. This is not a hardship, but still, I maybe need to rein it in. For one thing I am now on V5 of the products I am planning to launch and so I have analyzed and eaten my way through all those iterations. But also over the last few months as the weather has warmed up and the pandemic has wound down, I have discovered that Toronto has added some really...

A few weeks back, I listened to a podcast that the host kicked off by saying that her guest was one of her favorite people, “I always love it when I see your name!”. This made me think about all the people whose name makes me feel good, when I see or hear it. I thought of my friend, Megan, whose fictional Google review of her experience at a hospital made me laugh so hard I almost spit out my tea...